Gratitude, Time and (of course) Football 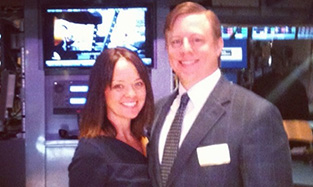 As far as I’m concerned, the “New Year” starts not on January 1, but the day after the Super Bowl. Or maybe I should just claim I celebrate the Chinese New Year instead and therefore look like less of a sports-obsessed superfan. 😉 It’s the Year of the Horse, which is of course making Broncos fans go nuts. Sadly there’s no such thing as Year of the Lightning Bolt.

Exactly one year ago this (Super Bowl) weekend I was in New York for a company board meeting as well to ring the bell on the New York Stock Exchange (#1 performing stock – holla!) My husband tagged along because it was his 40th birthday. Before I go further, I want to wish him another Happy Birthday coming up this week. No one beats this guy. He is there when I need him, constantly picks up my slack, is funny, wise, and oh my gosh the best dad in the world. As I type this, he is right now teaching a bunch of little girls to play fast pitch softball. All the good things in my life, they start with him.

Anyway, enough sappiness. A year ago, in addition to work and football-watching duties, we spent a day at the Met, where I got to pay a visit to my favorite painting, Madame X by John Singer Sargent. (Related note: I highly recommend the book “Strapless: John Singer Sargent And The Fall Of Madame X” by Deborah Davis).

At the time, my agent was shopping the manuscript for A Paris Apartment and I remember standing in front of Madame X (snapping the picture at right) and knowing-just knowing!-the book would sell. I say this not as a bright-eyed newbie (though I am that as well) but someone who’d experienced the ups and downs (and the way way way downs) of the publishing industry for several years.

Sure enough, the next month when I was in Paris for work, my agent called with the news that a very awesome editor at a very stellar imprint was interested in my book. (Okay technically she left the message when I was in Zürich but I didn’t listen to it until Paris – that still counts as Kismet, right?)

At times it feels like this has all gone very “fast” which is amusing because, as I’m sure my agent would attest, at times it’s been agonizingly slow. Heck, I started writing this particular book in 2010 and here we sit in 2014. Nonetheless, one year ago this weekend I had no guarantee this book would ever hit the shelves. Now Advanced Reader Copies are being distributed. For the publishing world, that is actually quite expeditious!

And today, one year after I stood in front of Madame X, I sent my agent not one but two edited and polished new manuscripts. We’ll see which one she picks to lead with next. Dealer’s choice! Both are very different from each other and also from A Paris Apartment.

I wanted to thank everyone for the support they’ve given me on the journey thus far, both now and before. It’s truly overwhelming. And my “day job”? Oh my gosh, every person there has been spectacularly, above-and-beyond supportive and in ways I never imagined.

But, more importantly, I want to thank everyone for their prayers and good wishes during my aunt’s critical illness.

After 14 days on life support, she was extubated and taken off the ventilator on Thursday. This is nothing short of a miracle. She will have many challenges in her recovery but two weeks ago we were told there was no hope. Funeral arrangements would need to be made. I’m so relieved and overjoyed for everyone who loves her and especially her husband, daughters, siblings, and the second graders she teaches.

So many people reached out, offering prayers and good wishes. People who’ve never met her, who will never meet her, even those who’ve never met me. The generosity of human spirit so moved me it’s difficult to express in words. I have always believed in the power of positive energy. And now I have proof, first hand, that it works. If you’re one of the people who said a little prayer, thank you, thank you, a million thank yous.

Have a wonderful weekend, everyone. (Go Seahawks!) Also, I’ll be giving away an ARC in the next week or so. Stayed tuned to my Facebook page for more details if you’re interested!